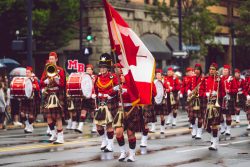 Located in the northern part of the American continent, Canada is the second largest country in the world after Russia, with a total area of 9,984,670 square kilometres or 3.85 million square miles. Canada borders to the east with the Atlantic Ocean, on the west with the Pacific Ocean, on the north with the Arctic Ocean and on the south with the United States of America (USA), making it the country with the longest coastline. The extension of the country can be reflected in its 6 different time zones.
Around 90% of its population of 36 million people lives within the 160 kilometres of the US border, the longest border in the world, and approximately 75% of the total population lives in the main cities and towns. The population density is 3.3 inhabitants per square kilometre and is between the lowest in the world and has more lakes and territorial waters than any other country, ranking it as having the largest proportion of fresh water lakes. The country is composed mainly of plains, with prairies in the south-east and mountains in the west.

Canada is composed of 10 provinces (Alberta, British Columbia, Manitoba, New Brunswick, Newfoundland and Labrador, Nova Scotia, Ontario, Prince Edward Island, Quebec, and Saskatchewan) and 3 territories (Northwest Territories, Nunavut, and Yukon). Successively, these can be grouped into 4 main regions: Western Canada, Central Canada, Atlantic Canada, and Northern Canada . Provinces have the responsibility of social programs as welfare, education, and health care, making provinces more autonomous than territories.
One of the most important decisions when immigrating to Canada is choosing the province where you want to live. To know more about the Canadian provinces and territories, please visit the government web page Citizenship and Immigration Canada (CIC), where you can find which one is the best fit for you to settle.

Canada has a frigid climate. Most part of the country has a cold winter climate, with average temperatures oscillating between -2ºC and -10ºC but southerly areas in summers are warm with temperatures between 16ºC to 28ºC. Recently, the temperature has increased in summer, and has decreased to glacial temperatures during winter.

The country has a federal parliamentary system and a constitution monarchy, being Queen Elizabeth II the head of state. At a federal level, Canada is officially bilingual and by law, it is required to preserve, recognize and support the equality of English and French in the Canadian society. All services offered by the Federal Government and almost every product labeling and packaging are available in both languages. About 18% of the population is fluently bilingual, but the majority of people speak English.

In 2015, Canada was the eleventh-largest economy in the world and it is among the 10 leading manufacturing nations. Ontario and Quebec concentrated most of Canada’s manufacturing sector, these include food and beverages, primary and fabricated metals, paper and related products, chemicals and petrochemicals. Natural resource-based economies are stronger in the Pacific, Prairie and Atlantic regions, such as mining, fishing, and forestry. Its economy relies mostly on its abundant natural resources and its leading international trade networks.

Canada invests in education about 5.3% of its GDP, subsidizing a considerable portion of education from kindergarten to college or university. An average of 51% of adults have completed at least an undergraduate college or university degree. The Nation has public and private education system, and compared to other industrialized countries, Canada has one of the best educational standards. Provinces and territories are the directly responsible for education supply. Depending on the province, high school can go up to 12 or 13 grade, and the school year goes from September to June. As for university, the school year starts from September until May. Canada receives many international students yearly, who can choose to study in English or French.

Canadian public health care system is recognized around the world. Vital care is accessible to Canadian citizens and permanent residents equally. The Federal Government regulates the health care standards across the country, but the health care systems are administered, implemented, and delivery by each province. Health care is paid through taxes in the majority of Provinces, except in the provinces of British Columbia, Alberta, and Ontario, that are the only ones that charge health care premiums.

Due to a large-scale immigration from many different countries, Canada is one of the most ethnically diverse and multicultural nations around the world. With over 200 distinct cultures, The Country is proud of its diversity and natural beauty, becoming it an icon of the identity of what the country is nowadays. This Nation is a collection of diverse regional, aboriginal, and ethnic subcultures often defined as a cultural mosaic, where people from different backgrounds are encouraged to hold their traditions and culture. The federal government recognized this multiculturalism and developed policies to promote and understand the differences between individuals and communities of different origins. The country welcomes thousands of new immigrants every year, all of whom see Canadian Immigration as the stepping stone to reach their life goals. Multiculturalism and the diversity in its peoples’ backgrounds are the essence of the Canadian identity.